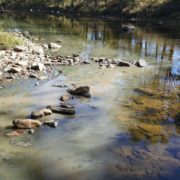 As you may know, the West Virginia Department of Environmental Protection (WVDEP) and the Town of Capon Bridge recently reached a settlement, called a consent decree, for the ongoing lawsuit regarding WVDEP’s allegations that the Town repeatedly violated the State’s Water Pollution Control Act through discharges from its wastewater treatment plant into the Cacapon River.

While the consent decree does not stipulate guilt or liability, it does require the Town to pay a relatively modest fine ($5,000). It also establishes additional penalties and fines for any future violations of the plant’s “maximum average monthly effluent limitation.” Essentially, this maximum limit is the largest amount of pollution that is permitted in the plant’s discharges into the Cacapon River without causing harm.

Notably, the consent decree lacks an enhanced testing and sampling requirement to determine the plant’s average monthly effluent limit. Instead, the consent decree relies on the minimum testing schedule already in place—only four tests per year performed by the Town itself.

Given the plant’s past history and frequency of pollution, this designated level of testing is inadequate. With only four tests per year it would be difficult, if not impossible, to accurately assess the average monthly effluent limitation; consequently, leaving the Cacapon River more vulnerable to continued pollution. By definition, such an assessment should require at least two tests per month.

The Friends of the Cacapon River know wholeheartedly that the Town leaders have a mutual desire to keep the Cacapon clean. We are excited about the pending upgrade of the wastewater plant and commend the Town for its hard work on this issue. Yet, the plant’s much-needed upgrade will not be completed until July 2021.

In the meantime, the Friends of the Cacapon River—as well as everyone who enjoys the river—need assurance that the existing plant is monitored regularly and in compliance with its permit and the Consent Decree. We understand the financial and time constraints that accompany these kinds of issues and do not want the Town to be burdened with additional penalties and fines. But, we believe in the wisdom of the proverb “Trust but Verify.”

Enhanced testing will allow everyone to rest assured that all parties are abiding by the agreement and that the Cacapon River is safe for all of us to enjoy.

This consent decree is open to public comments, and we strongly urge all river lovers to take a moment to contact WVDEP with one simple message: For the Town of Capon Bridge wastewater treatment plant, require a minimum of two effluent samples and laboratory tests per month by an independent testing agency. 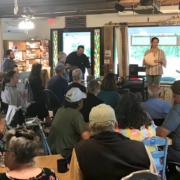 Hosted at The River House in Capon Bridge, the more than 45 attendees listened to short presentations by President Rachel D’Agostino and Board Member Tim Reese. They also enjoyed entertainment provided by musicians Mike and Jo Everson and juggling storyteller Jimi Dennison. The event was sponsored by Danny Riggleman of WV Land & Home Realty, Taproot Farm, and Mountain View Solar.

Everyone was encouraged to make a public comment to WV Department of Environmental Protection concerning the need for enhanced testing of the wastewater treatment plant. The public comment period ends on May 17, and we are still encouraging citizens to email WVDEP with the following statement: “For the Town of Capon Bridge wastewater treatment plant, require a minimum of 2 effluent samples and laboratory tests per month by an independent testing agency.” Comments can be submitted by email to DEP.Comments@wv.gov. There are only TWO days left to make your comments to DEP, so please do so today!

Our president Rachel D’Agostino updated the gathering of recent the successful trash clean-up near Great Cacapon. She also reported on the new river access improvements pending at Great Cacapon and in Capon Bridge, as well as our soon-to-be-released Cacapon River Stewardship Guide. Finally, Rachel announced the use of a new Water Reporter app that will allow boaters to identify and record river issues, river animals, and fish, among other things, via photos with their smartphone.

Many thanks to all who attended! 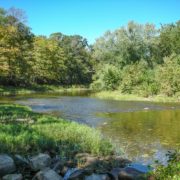 Join us on Sunday, May 5 at 3 PM for our spring member gathering at The River House in Capon Bridge, WV.

This a fun, social gathering of all who love and want to protect our river. Come to hear the latest news about the Cacapon River and the activities of the Friends of the Cacapon River, meet like-minded river enthusiasts, eat delicious food, and hear live, local music. We’ll also discuss the latest information on the Capon Bridge wastewater treatment plant.

Special thanks to our meeting sponsors—Mountain View Solar, Taproot Farm, and WV Land & Home Realty—for supporting the Friends of the Cacapon River! 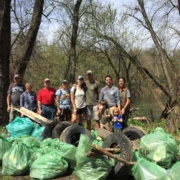 We couldn’t be more thankful for the more than 20 people who joined us for our first Cacapon River Cleanup of the year! On Saturday, April 13, these dedicated volunteers worked hard to remove close to 40 bags of trash, 10 tires, and countless other rubbish from the banks of the Cacapon River.

It’s only through the help of special, passionate volunteers like these that the Friends of the Cacapon River is able to achieve our goal of removing as much trash as we can from our river this year.

Together we can keep the Cacapon clean!

Hands-on, dirty, and gratifying! Roll up your sleeves and help the Friends of the Cacapon River cleanup our river.

Join our passionate volunteers who are working hard this year to keep the Cacapon River beautiful and clean by removing trash, litter, and old tires from our river’s waters.

Our first river cleanup of the year will kick off on Saturday, April 13, 2019, at 11 AM, at the Great Cacapon Public River Access Site in Morgan County.

This family-friendly volunteer event is a wonderful place to meet other like-mined river people while helping clean up the Cacapon River!

Please wear appropriate clothing, such as boots and long pants that you don’t mind getting dirty. We encourage you to bring your own water bottle, too.

The cleanup with start with a very brief introduction on the Friends of the Cacapon River and on cleanup safety. We’ll provide the bags, work gloves, and “trash grabbers,” as well as drinking water and some light snacks. Then it’s off we go to remove as much trash as we can!

Directions: The Great Cacapon Public River Access Site is located off Rt. 9, about 1/2 mile from the U.S. Post Office in Great Cacapon. It’s under the green trellis bridge and marked with a brown street sign that reads “Public River Access.” If you’re coming from the Berkeley Springs area, you’ll make a left turn on the gravel road before the green bridge. If you’re headed from the Paw Paw area, you’ll make a right turn after the bridge.

The Friends of the Cacapon River received a $5,000 grant from the West Virginia Department of Environmental Protection’s Stream Partners Program. The grant funding will be used to update, streamline, and distribute our most requested publication: theHomeowner Packet: A Guide for Families Living Along a Waterway, which was originally created in 1995.

We hope that by empowering the community with this essential river stewardship knowledge, individual landowners will take the necessary steps to maintain and improve the health of the Cacapon River—which will ultimately have a lasting, beneficial impact on the river and increase stewardship of and appreciation for the clean, beautiful river on which we live and play.