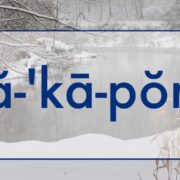 Have you heard “Cacapon” pronounced differently? Maybe you’ve even wondered how to say it. Truth is, over the centuries, the spelling and pronunciation of our river’s name have varied. Though the consensus is that the word is derived from the Shawnee language, dozens of variations exist.

To-be president George Washington, in his 1732 Journal of My Journey Over the Mountains, used the version “Cacapehon.” Other historical spellings are Capcappinn, Capecapon, Cackapohon, Cape Capon, and Capon. Thankfully the changes ended in 1916 when the Board of Geographic Names declared our version—Cacapon—the final one.

What’s not as well known is there are multiple meanings of “Cacapon.” Medicine waters is the popular translation. More than 100 years ago, an early land surveyor of West Virginia wrote that the word is Shawnee and a descendant of the original spelling “Cape-Cape-Pe-Hon”— meaning, as he described, “Medicine Water River.” In 1906, this meaning was confirmed by another land surveyor who wrote that “Cacapon” meant “the medicine waters” in a Native American language.

The lesser-known translations of our river’s name are “to appear,” “to rise to view,” and “to be found again.” These versions align with the fact that the Lost River, after it emerges from a one-mile underground flow, re-emerges as the Cacapon River.

So in the end, as with most things, the historic spellings and translations of “Cacapon” are up for interpretation. With any one you choose, the Cacapon River is still a healing river that rises above others.