Our beloved Cacapon River is unique among rivers. It is a clean, healthy local and state treasure that is
mostly free of threats. But in recent years, environmental threats to our river’s health and recreational
qualities have continued to arise. Unfortunately, various forms of pollution, including runoff and
erosion, can interfere with the health of the river and watershed. Therefore, it is important to protect
the quality of our watersheds.

Here, you can find the most recent, up-to-date information on the river threats that the Friends of the
Cacapon River are monitoring closely.

Three municipal wastewater treatment plants empty into the Cacapon River — in the towns of
Wardensville, Capon Bridge and Great Cacapon. The Friends of the Cacapon monitors the regulation of
these facilities by the WVDEP.

Thanks to the work of local activists, Cacapon River watershed groups, WVDEP and the Capon Bridge
Town Council, past sewage violations have been remedied. The Town of Capon Bridge has been
diligently working to improve its wastewater treatment plant performance for the past several years.
The facility has been in regular compliance with its permit for over two years.

The Town of Capon Bridge is well underway in a comprehensive process to overhaul and update the
facility. The planned upgrades to the collection system and plant will cost in excess of $3,000,000 and
have been approved by WVDEP. The Town is currently working through the regulatory process and it is
anticipated that construction of all the new upgrades will be completed in 2021.

The Friends of the Cacapon River plans to provide independent monitoring through periodic effluent
tests on all three of these municipal facilities in 2021.

On June 30, 2021, the West Virginia Department of Environmental Protection (WVDEP) announced that it had begun monitoring pollution in the Cacapon River watershed to determine if pollution budgets, known as Total Maximum Daily Loads (TMDLs), are needed. WVDEP determined that the Cacapon River is “recreationally impaired” in 2012.1  Known impairments for the Cacapon River are “conditions not allowable” for aquatic life and for filamentous algae. WVDEP has established monitoring stations throughout the watershed that will be visited 10-12 times between July 2021 and June 2022 and has posted a map of the sample sites at
https://wvdep.maps.arcgis.com/apps/MapJournal/index.html?appid=294fe4c0298d4f86bc5247554dfd8edc (scroll down to the second-to-last screen of this storymap for the map of sites).

If a TMDL is being calculated for a river or stream, it is already known that the river or stream is receiving too much of a given pollutant. The question then becomes: What sources of the pollutant load have to be reduced, and by how much?

According to the WVDEP website, WVDEP gathers available information for the sources of pollution in the watershed. Typical sources include wastewater treatment plants, logging, roads, agriculture/pasture, and residential areas. When the pollutant source data are complete and WVDEP calibrates the computer model, the model predicts instream concentrations of the modeled pollutants (e.g., fecal coliform bacteria).

WVDEP plans to issue a draft TMDL in early 2025, with a public comment period for at least 30 days. WDVEP will respond to public comments and agency concerns by June 2025, and will submit the TMDL to the U.S. Environmental Protection Agency for approval by September 2025.

The filamentous algae bloom in the Cacapon River stretches for several river miles near Yellow Spring in Hampshire Country. In the summer months, the largest patch has been 3 miles long and covers up to 80 percent of the river, making swimming, fishing, and paddling nearly impossible. While filamentous green algae are not toxic to our river’s waters, and are considered more of a nuisance than a toxin, the TMDL monitoring will provide data about potential pollution sources that are causing the algae blooms.

The WVDEP map also shows three streams in the Cacapon River watershed with biological impairments, meaning the creatures found on the bottoms of these streams were not abundant nor diverse enough to meet a threshold score for a healthy stream –Hiett Run and an unnamed tributary of Mill Creek in Hampshire County, and Moore’s Run in Hardy and Hampshire Counties.

The banks along the Cacapon River are vital to keeping our beloved river clean. Healthy, intact
riverbanks that are lined with trees, shrubs, and grasses create an underground network of deep root
systems that hold soil in place and prevent riverbank erosion after heavy rains and flooding. When the
Cacapon River’s clear waters turn brown and muddy after rains it’s because loose soil has washed away
from riverbanks and buffers. The official name for these muddy waters is sedimentation, and it’s one of
the worst problems for the Cacapon River. When the loose dirt settles on the bottom of the river, it
smothers and kills the aquatic plants and bugs that support life within and along the river. It also buries
the eggs of spawning fish, which reduces our healthy fish populations.

Helping reduce erosion and sedimentation depends on each local landowner maintaining a healthy river
buffer of native plants along the banks.

When it comes to pollution, the Cacapon appears to be degraded by nonpoint sources. Unlike point
source pollution, which comes from an easily identifiable source, such as a pipe from a factory, nonpoint
source pollution comes from a broad array of hard-to-control sources. These sources include storm
runoff from farm fields, streets and highways, construction sites, and logging areas.

Another source of nonpoint pollution is malfunctioning septic systems that leach pollutants to the
surface. The pollutants from these sources come in many forms. They may be bacteria, nutrients,
sediment, or ammonia. In other cases, such as runoff from farm fields treated with pesticides or
herbicides, the pollution may include toxic chemicals.

Of all current land uses, farming practices—particularly allowing cattle unrestricted access to the
river and plowing too close to the riverbank — appear to be the major causes of nonpoint source
pollution Cattle degrade water quality in at least two ways: 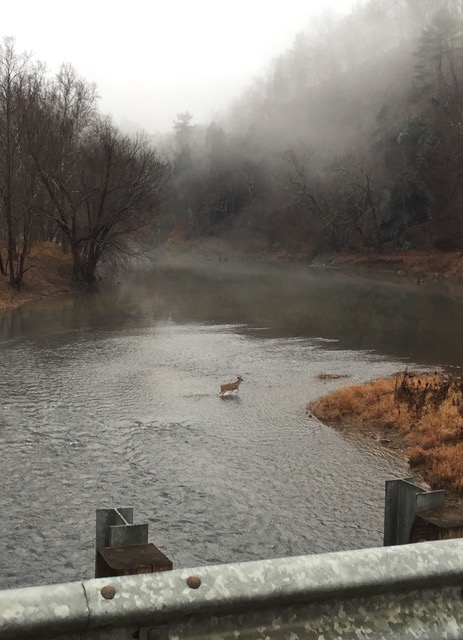